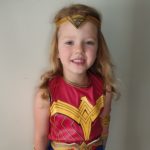 As told by her mother, Bec.

After being sent to emergency with her 5-month-old daughter Bridgette in respiratory distress, Bec knew something was wrong. But on arrival to the hospital two days in a row they were sent back home and told it was just viral.

“On the third day when I turned up at the hospital Bridgette was listless, not feeding and not responding to much – I was distraught and tired of being turned away but they finally admitted something was not right and she couldn’t maintain her oxygen saturations.”

A few months after the hospital stay, Bec noticed Bridgette’s breathing was still not normal. They saw numerous GPs for opinions and were told everything looked fine.

“I knew something wasn’t right and after being told ‘it’s nothing’ so many times, I was almost defeated. Instead I showed a GP some video footage of Bridgette’s breathing and we were referred to a paediatrician. After months and months of being ignored, within a week we were told our daughter had some form of chronic lung disease. And our journey of diagnosis started.”

“The diagnosis process was traumatising. To not have any certainty around what is causing your child’s symptoms and breathing difficulties and then not knowing what treatment is going to work, is really hard. It’s a never-ending pool of questions. You feel let down, unsupported and alone.”

“Rare is actually rare – the medical professionals are learning about it, there’s limited information and that makes it really hard for families to get the financial support and emotional support that they need.

“You have to become the medical professional and be across all the terminology and medications. Even now that we have a diagnosis and a treatment plan in place, I’m always on edge. You can hear Bridgette puffing in her sleep and we never really know what her limit is or what creates the flare ups. If she’s struggling is it because she’s pushed herself too much or is it the cold weather or is she getting sick? As the parent, the onus is on you to constantly monitor your child and notice any changes.”

While the day-to-day challenges remained and many questions were still unanswered, for Bec’s family, there was hope on the horizon.

“With rare lung disease in children, while our family and friends are supportive, sometimes it’s hard to explain the condition and the impact on our lives and it’s hard for others to relate to. Being able to access support through Lung Foundation Australia and connect with other families who understand what we’re going through has been massive.

“It gives you strength. They can relate to when you’re having a bad day, to the frustrations of having to be in hospital and how much of an impact this whole thing has on your whole family and your own emotional and mental wellbeing.

“As the parent, the hardest part is you’ve got to stay strong all the time. You’re always the one there in the early hours and all hours of the night trying to look after your child that’s sick but also keep everything else running in the background. It’s such a huge support having people who you can relate to and they appreciate and understand what you’re going through.”

Bec hopes more families will be able to connect with the services and support that have helped make the future a little brighter for her family.

“To all the parents and grandparents out there and anyone who has someone that they love that has a lung condition, know that you are not alone. We are here, you may not have found us yet but when you do, we will be there to support you through the process.

“We might be hard to find sometimes because we’re rare, but we are here and we would love to hear from you, so please get in contact with Lung Foundation Australia and we will welcome you and send you lots of love.”