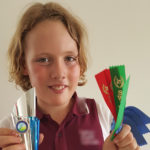 In 2009, Meika and Anthony welcomed their first bundle of joy to the world, Hamish. Although he wasn’t a great sleeper, the new parents thought everything was going okay. “At about 8 weeks of age, I noticed grunting sounds when he was breathing,” Meika recalls. “We went for our usual check-up and the paediatric nurse didn’t notice anything unusual. I didn’t push it – being a first-time parent, I just thought he was a bit snuffly.”

A few months later, a paediatric nurse noticed some abnormalities in Hamish’s breathing. The family were referred to a paediatric doctor and Hamish underwent a sleep study before a referral to a paediatric lung disease specialist in Sydney.

“He had lost a bit of weight but we’re both very tall and lean, so we thought we just had a lean baby. Then it all got quite scary because we didn’t know what was going on. We spent two weeks in hospital in Sydney trying to entertain a six-month-old baby with 7-8 kids on the ward and then having to go through the ringer of every possible test – being poked and prodded. It was awful for Hamish – he would cry at every person who came in wearing a white coat.”

“Our specialist was brilliant – I remember asking him if we were going to have to do a lung transplant. I asked him ‘how bad is this, is he going to die?’. I was trying to be brave enough to ask those questions, but the specialist was unable to give us a straight answer. Suddenly, we were in territory I never dreamt we’d be in.”

“As a last resort, Hamish underwent a lung biopsy and we came home to Wollongong with a very open diagnosis. We were armed with a few phone numbers, some discharge papers and a bottle of oxygen. All we could do was go home, focus on putting weight on Hamish and cross our fingers.”

For the next three years, Hamish relied on oxygen 24 hours a day but the family of three made it their mission to get on with life. “We had always been very active people, so we still went out for bike rides and Hamish would sit in a seat on the front. We’d take the bladder out of our CamelBak and put his oxygen tank in and away we went – we got lots of funny looks,” Meika recalls.

In 2011, the family welcomed a second son, Angus, and 2012 brought with it renewed hope. The specialist gave Hamish the okay to come off oxygen and what seemed impossible was suddenly in reach. “A few months later we decided we’d go on a great big holiday. We moved to England where we lived for the next four years. It was always a dream, but we couldn’t do it when Hamish was on oxygen.”

“In the early days, when he came off oxygen, we still monitored him constantly – he always had an oximeter on him at home to check his levels and we’d check on him throughout the night. We would get nervous every time he’d come down with a cold because it took so long for him to get over it.”

Meika, a fitness enthusiast and qualified swim instructor, knew the benefits of swimming for lung capacity. “Hamish may never be a marathon runner, but we imagined a sporty future for him. He has always been so determined to give things a go so we started swimming lessons in England. When we returned to Australia he really started excelling in the pool and was put up classes and into a squad. In 2018 he set himself a big goal to become Junior Boy Champion and trained hard for the next six months and won it. All his dreams have come true.”

“I remember saying to the specialist when Hamish was six-months-old, ‘when can I start doing swimming lessons?’. We made a joke of the oxygen hose maybe working like a snorkel. I don’t think at that point I fully accepted what was going on. Hamish doesn’t remember his time on oxygen – he knows he has a chronic lung disease, but he doesn’t let it hold him back.”

For Meika and Anthony, their son’s journey brought to their attention a sad reality. Lung disease is chronically underfunded – and the lack of funding impacts on access to support, treatment and research.

“When our specialist used to talk to us about research going into lung disease and the knowledge that doctors have, he described it as being at the tip of the iceberg in terms of what we know about the lungs. That really surprised me. More funding needs to go into research, so we can keep advancing our knowledge.”

“We were fortunate to be put in touch with other families going through a similar situation and were able to share notes. It was the little things – like the tape we used to keep Hamish’s oxygen cord in place made marks and blisters on his face. Another family ordered theirs from America and gave us a roll and it all went away. We need greater awareness in the community and to bring people together. And we really need more people like our amazing specialist – I think we need to clone him!”

Today, Hamish, 9, is excelling at school, plays AFL, loves riding his bike, building Lego, playing the piano and guitar, and is a member of the local surf club. Not only has his journey instilled in him fierce determination, it has also blessed Hamish with wisdom beyond his years.

“Being different has pervaded his subconscious at some level and he’s become a real supporter of other kids who may have special needs of some kind. Hamish’s illness and our experience of it changed us as people and strengthened us as a family. And without the support of those around us, including professionals, friends and random people on the street, our journey would have been doubly difficult. I think we have one of the best kids and he’s made the journey a lot easier for us.”

In Australia, there is very limited treatment, support and research for children living with a rare lung disease. But, there’s always hope. Together we’re working to ensure every Australian has access to the treatment and support they deserve. Please, donate today to support critical research and help ensure a brighter future for people like Hamish.