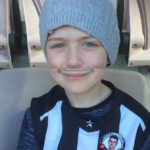 Harrison was a difficult feeder from birth and at 10 weeks of age he was breathing very fast so I asked a close friend of mine who is medically trained to come over. We counted Harrison’s respiratory rate and work of breathing. Both were significant so we called an ambulance and Harrison was taken to hospital and put on oxygen. My friend saved Harrison’s life. He was working hard to breathe and had blue colouring around his eyes, nose and lips. It turned out he had caught a respiratory virus, the first of what would be many to come.

We lived in and out of hospital, more in than out, for the first year of Harrison’s life.

At 11 months old, Harrison had a lung biopsy and was found to have an interstitial lung disease. He has other medical issues as well so it was a rough start and has been a bumpy road with hospital as our second home and a bag always packed ‘just in case’.

By the time Harrison was eight years old I had called the ambulance more times than I could remember and had seen my child struggling to breathe on many occasions. Harrison is now on oxygen during the day and on high flow oxygen at night.

As a parent you want to place the blame somewhere and initially it tends to be yourself. I felt like I had let Harrison down but vowed I would do anything to help him.

It was a lonely time when Harrison was diagnosed, feeling like you had a child who was so rare and the lack of information made it even more difficult.

We would research and read papers from far and wide. While some friends were supportive, many walked away, and family struggled to see their loved one unwell and that there was nothing anyone could do to help him.

The stigma surrounding lung disease shocks me, particularly when people think it is ok to stare or ask questions, ‘why are you parking in the disabled parking’, or ‘is he ok?’, ‘is it terminal?’ The worst of all was when someone said, in front of Harrison, not to worry ‘all children go to heaven’.

I’m now a member of Lung Foundation Australia’s Young Lungs Committee, working with other parents of children with a rare lung disease to actively raise awareness for our children and gain funding that will lead us to better support and knowledge, and ultimately better research to lead to improved treatment options. It has given us, as rare lung parents, a voice that we need to be heard. I hope these awareness campaigns encourage empathy and compassion rather than curiosity, judgement and gossip. Harrison even ran his own fundraiser for Young Lungs.

He is an amazing little boy who has so much love to give and never complains.

Harrison is now at school and whilst it is a challenge, as he gets really tired, he loves being with his mates and his dream is to learn to play football and run fast. He is a dedicated Collingwood supporter, loves computers and gaming, and loves science and learning what makes everything work.


In Australia, there is very limited treatment, support and research for children living with a rare lung disease. But, there’s always hope. Together we’re working to ensure every Australian has access to the treatment and support they deserve. Please, donate today to support critical research and help ensure a brighter future for people like Harrison.