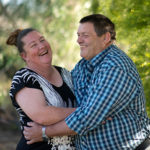 For me, having a positive attitude really made a big difference as it prompted me to fight.

Brett was accidentally diagnosed with lung cancer in 2011 after going to see his GP about a persistent chest infection.

“My GP had given me some antibiotics and said if my chest didn’t clear in two weeks he would send me for a scan. After no improvement, off I went to have the scan.”

Brett had the scan two days before Christmas and the x-ray department told him his results wouldn’t be available until after the Christmas break. But within an hour of having the scan, Brett got a call from the clinic telling him to go straight back to my general practitioner’s surgery where the doctor was waiting for him. He knew it wasn’t good news.

“When the specialist told me, I said, ‘Ok, what do we do about it?’. My wife was upset with the diagnosis and struggled to come to terms with it to start with, thinking I was going to die.”

“I tried to normalise my diagnosis and kept a positive attitude. I was focused on what we were going to do to deal with the lung cancer and I didn’t sit around feeling sorry for myself.” “I don’t like keeping anything from my children so we sat them down and explained the situation to them. Obviously they were upset.  We all wanted to understand the situation I was in and what had to happen to fix it so we contacted Lung Foundation Australia who were always willing to chat when we needed it.”

“I felt a little ashamed when I was first diagnosed as most people that you talk to and they hear that you have lung cancer ask the same question, “did you smoke and how many a day did you smoke?”. I would tell them not all lung cancers are caused by smoking.”

In March 2012, with his family by his side, Brett was admitted to the Princess Alexandra Hospital for his lobectomy and over the following months he fought the battle of his life.

“During my treatment I had chronic tonsillitis so I was on large doses of antibiotics. I was determined not to sit around moping about feeling sick, so I would get Tina (my wife) and the kids in the car and go away for a few days. Tina thought I was trying to live out my bucket list, but I wasn’t. This was my way of dealing with the horrible side effects of chemotherapy. I found that if I was doing something, I wouldn’t be thinking about how sick I was feeling.

“For me, having a positive attitude really made a big difference as it prompted me to fight.”

In 2017, Brett was miraculously cleared of lung cancer and now lives with Chronic Obstructive Pulmonary Disease (COPD) as a result of damage to his lungs.

“Having COPD isn’t a life sentence; it just means that you have to make changes to how you do things and to get to know how your body works a bit better so you can adapt to the change.”

“I can still run but not as far, and the biggest thing I found hard was being so out of breath after only a short distance and how long it would take for me to get my breath back. Having trouble breathing can be quiet scary at times.”

Brett made the difficult decision to retire from the Fire Service but joined the Rural Fire Service as a volunteer firefighter and also volunteers at the Toowoomba Base Hospital chemotherapy ward one day a week to help cancer patients going through the same difficult journey that he did.

There are positives that have come out of having cancer. It isn’t necessarily a death sentence but the start of a new life.

“I now have a different look on my life. I try not to sweat the little things anymore. I have a passion to help people dealing with cancer and I like to help make their lives that little bit better if I can.”

Brett’s journey has taught him a lot about the power of a positive mind and it’s a lesson he’s determined to pass on.

“I think by staying positive it has helped me survive this journey and it has also minimised the negative effects on my family. My seven kids travelled the journey with me and they have said that they have been able to deal with my cancer a lot easier than they would if I didn’t keep them involved.”

“The advice I would give to someone who has been diagnosed would be to try and stay positive and not put your life on hold. Just try and live as normal a life during treatment as you possibly can because I found, even after chemo when I felt like crap and didn’t even want to get out of bed, I would force myself to get up and do something which would make me feel better. If you keep doing things you will feel better for it.”