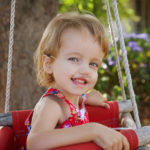 She was dismissed as having ‘just a cold’. Liz, Charli’s mum, recalls, “We were worried and confused, but got marched out the door. The next day we were back in the Emergency Department. It was not just a cold.”

After weeks in hospital, Charli underwent endless tests but a clear diagnosis was still not found. By this point, Charli’s parents were feeling petrified, lonely and completely unsupported from a system which had no clear answers. They began to frantically search the internet. “We were at a loss and terrified as to what the future would hold for our little girl.”

Three long months later and still not knowing her condition, Charli underwent further invasive tests. This was risky and challenging in a small baby with lung issues. “Watching her tiny, motionless and puffy body connected to every tube and machine known to man was beyond any trauma a parent should ever experience. I could not breast feed or hold my beautiful little girl. I could not look away or leave her side.” And to add to this, the uncertainty and the lack of a support network surrounding rare lung disease only amplified their heart ache.

By this stage, we were so desperate for an answer that might enable the doctors to better treat Charli’s condition, or at worst, help us understand her prognosis and plan for the unthinkable.

They pushed for further testing to be conducted overseas and finally were told that Charli had Childhood Interstitial/Diffuse Lung Disease (chILD) with an unknown cause (also known as Idiopathic).

The unknown interstitial lung disease diagnosis is one of ongoing uncertainty. There are no clear guidelines, no protocols, no actual prognosistics, and no formal treatments. There is just empty uncertainty and a battle between hope, grief, and acceptance for Charli’s family. With no information or support available, Charli and her parents relied on the informal support of their family and friends.

Constantly hooked to an oxygen tank, normal everyday activities for a three year old, like going to the park, are a challenge for Charli.

She has not been able to attend childcare like other children of her age. Yet, despite her ordeal and being on oxygen 24/7, Charli is a bright and bubbly three year who loves ballet, the colour blue and has a fascination with hippos. At the moment, Charli doesn’t see herself as any different from other kids, except that she has “Ox-E-En”, tubes and she does lots of “doffing (coughing)” when she struggles to breathe. According to her “I’m just Charli!”

It is unclear at this stage what Chali’s long term prospects are. Some Doctors are hopeful she will grow out of the condition, others are less optimistic. That is the thing with rare diseases – they simply don’t know. They are guided by minimal information and often little or no previous experience with a condition exactly like this. Prognosis and treatment plans become educated guesses. The disparity in opinions makes it very difficult for Charli’s parents to know whose opinion to trust, or whose treatment plan to go with.

“Through programs like Lung Foundation Australia’s Young Lungs, the needs of families like ours can be heard, prioritised, and implemented. My hope is, that the next family to walk the path into ILD will not have to experience the same degree of uncertainty and isolation that we initially experienced. They will know that Young Lungs, and other families, are here to support them and walk alongside them,” Liz, Charli’s mother.