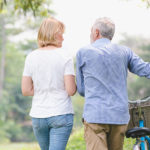 My name is Dagmar and my husband, Garry suffered from Idiopathic Pulmonary Fibrosis (IPF). In October 2010, after a bout of pneumonia, Garry was referred by his General Practitioner (GP) to a lung specialist at the Alfred Hospital in Melbourne. By January 2011, after a lung biopsy, he was diagnosed with IPF.

No known cause and no known cure- what a kick in the guts. How do you digest a diagnosis that may only give you two to three years?

It feels like a punch to the system that you may or may not be able to accept. Accepting it is difficult for both partners in differing ways, as the patient has to come to grips with learning to live with an incurable disease and the carer has to try and help make life easier to the best of their ability. Each person fights the disease in their own way.

Some people are diagnosed early and have the ability to live a reasonably normal life whilst others have to learn to come to grips with it very quickly.

Garry and I were extremely lucky with our two lung specialists. We asked, right from diagnosis that they be open and honest with everything we would encounter. We were told that the disease appears to plateau and then drop suddenly. This is sometimes due to infection or just one of the idiosyncrasies of the disease. We managed the disease with reasonable ease at first and with constant contact with Garry’s specialist.

An opportunity arose, and Garry went onto a trial drug. For 12 months he was taking the placebo after which he was put on the actual drug. In 2012, we decided to put together a bucket list and get some of our plans in action so we organised a seven week road trip that took us from across Australia starting in Melbourne, through Darwin, Katherine, the top end and through Western Australia. Even though some of the days were a little slower, we managed to see and do lots of our bucket list items. We stayed underground in Coober Pedy, flew over Lake Argyle and the Bungle Bungles, drifted down to Kununarra on a river cruise and saw the most beautiful sunset on Cable Beach in Broome. We met wonderful people on the way and made some lasting friendships.

In February 2015 we decided our last holiday was to go to Tasmania.

Garry was unable to go to a lot of the scenic lookouts, so I trudged up and down, took photos and at night we would download the photos and enjoy them together.

After our holiday in Tasmania, Garry became ill more regularly and the drops and plateaus changed. In May 2017, he was admitted to hospital. After four days, the doctors said they couldn’t do anything to help and suggested the local hospice. He spent two weeks there, having his medications tweaked and resting in general (whilst being very spoilt by the marvellous staff).

On 3 July I had to have him admitted to the hospice because his blood pressure dropped dramatically and I was worried I couldn’t care for him myself.  He had lost heaps of weight and on the 5 July, after an amazing day with his two children and four of his grandchildren, his body eventually gave up the fight. Garry was such a brave and determined (and stubborn) man but he was a fighter and fought to the bitter end. His death was peaceful.

In 2014 Garry woke me one night and said he thought that we should try to start a support group for IPF sufferers  and their carers. This became his goal and his passion. With the help of his specialist and the Lung Foundation Australia, the Peer to Peer Support Group and a small carers group was established throughout Australia. The group was developed to enable people with IPF to interact with others on an even par without having to explain the intricacies of IPF.  One group in Melbourne is meeting “face to face” regularly and others are communicating by phone and email.

Find out more about the Peer to Peer Support Group, here.