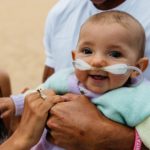 Shaun and Georgie knew from the moment their little girl was born something wasn’t right. Research into lung disease holds the key to allowing their girl to grow up, to do the everyday things most take for granted and to, one day, have her own family.

She’s cheeky. Funny. Happy … and attached to oxygen 24 hours a day to support her breathing.

Eve was born with a collapsed lung. Within minutes, she was taken to special care and the next time her parents saw her, she was covered in tubes.

Eve spent two months in the Royal Children’s intensive care unit and was diagnosed with Childhood Interstitial Lung Disease and Pulmonary Hypertension – rare conditions that provided very limited understanding of treatment options. Genetic testing later revealed a TBX4 gene mutation with a specific sequence that is not reported anywhere else in the world. There is no one else to compare her to.

Her heart is five times larger than it should be.

Shaun and Georgie are proud parents who dream of finding answers. A treatment that will allow Eve to do all the normal things a happy little girl her age should be doing … without needing to be constantly attached to an oxygen cord.

“I want her to be able to ride a bike without having to carry a tank,” Georgie said.

“I want her to go to kinder and go to school and experience all those really normal day-to-day activities like a normal child would.

“She’s gone through so much trauma yet is so happy, joyful and bubbly.

“As parents, we get so much inspiration from her resilience and happy nature.”

Childhood Interstitial Lung Diseases are a rare group that affect infants, children and adolescents. The absorption of oxygen into the blood is impaired, resulting in breathing difficulties and decreasing oxygen supply to other organs in the body.

From birth, Eve has been unable to breathe on her own. No doctors could tell her parents exactly what was causing this inability to breathe. It took a lot of waiting, a lot of tests to figure out Eve had a lung condition.

A 15m cord provides Eve with oxygen. Every moment, every day.

“I hope for Eve to be happy as any parent does for their child.

“She’s got this big wonder for the world and is just … cheeky. Very cheeky and very funny,” says Shaun.

“Lung health doesn’t seem to get the priority that other illnesses and diseases do.”

Like the feelings many of us have had this year, Eve’s future is uncertain. No one knows exactly what’s wrong but they do know she can’t breathe on her own.

Her symptoms are less than one in a million. She is too small and fragile for more testing.

“Research to us means the world. It gives families such as ours … all families caring for someone with lung disease, hope,” says Shaun.

This Christmas, give hope by giving to research. Give hope to parents such as little Eve’s.