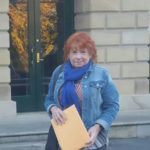 My name is Frances Spears, I’m 64 years old and live in Kingston, Tasmania with my little cavoodle, Scarlet. I moved to Hobart to be closer to the younger of my two sons, the eldest travels the world.  I went to university and obtained a degree in Public Relations when I was sixty and still could not get work so started to write.  I have a little saucy novel self-published and have just finished a true story, mixed with fiction to be published by The Tasmanian Arts Centre People’s Library later this year.  They have advised me to have it published commercially also.  I am a fighter for pensioners and women’s rights and have been known to follow up with politicians until they listen.

About eight years ago I started to become breathless when walking and noticed it had become considerably harder when I walked the Burnie Ten Annual race the second time.  I spoke to my GP who has turned into my saviour.  He did a spirometer test as he thought it was asthma but decided it wasn’t and he sent me to a specialist in Launceston. The specialist diagnosed me with COPD.

I asked what this meant for me and he replied, “you won’t live to be very old”.  I was devastated.

I went back and told my GP and he was furious.  He started me on Spiriva and at the time we didn’t have a pulmonary rehab clinic in Burnie.  As soon as we got one, I was first on his list to go.  It got me doing exercise again which I had all but given up.  I got very little empathy from anyone who asked what was wrong and when I tried to tell others at my call centre workplace, they said it was my own fault and the ones who smoked all seemed to think it wouldn’t happen to them.   I was diagnosed about seven years after I had given up smoking.  The only symptom I had and still have is breathlessness.

I ended up in hospital twice with chronic chest infections and it was quite frightening.  My GP had a script for an antibiotic that seemed to work for me after he trialled a few, that is kept to this day at the pharmacy in case I get sick and can’t see the doctor immediately.  After rehab, I moved from Burnie to Hobart where I literally hunted for a doctor I could see constantly and who would listen to me and work with me.  I finally found one and she in turn sent me to see a lung specialist who I have regular appointments with.  My new doctor has made it clear that I am open to any research trials etc.  I have also been to pulmonary rehab here in Hobart, just as a refresher, and it has given me new energy.

When I was first diagnosed, I was scared and angry, considering that nobody seemed to care much.  After all, it was my own fault.

Thanks to my GPs and my determination not to let the original specialist be right, I am on the treadmill 45 minutes daily now.  I have had a set back with a small heart condition but I plan on beating this.  I am a little fed up with people saying, “well there’s nothing you can do about it now”, or looking at you like you are a sook and telling you that everyone breathes worse as they get older.  One friend actually said, ” oh well, you’ll survive, I’ve slowed down too with age”. Nobody seems to know much, or care much.  Most people have told me at least I don’t have cancer. It affects every part of my waking hours. Decisions on what I am going to do depend on how hard I think it will be to breathe. But I read everything I can and have a great doctor so I am on a treadmill nearly every day and push my doctor to try everything. I can’t walk outside in the elements as well but I believe that the exercise has made it much easier and I will keep trying.  I want to be here when I’m ninety.  Has pulmonary rehab made a difference?  All I can say is that, coupled with the faith of my GP in me, it has done wonders.  I wish there was more that could be done.  It’s lung tissue right?  It’s killing thousands worldwide daily.  With the technology we have, surely there is a way besides a transplant, which I understand you need to be nearly dead to qualify for anyway.