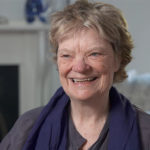 Academic & grandmother-to-five who has experienced multiple episodes of pneumonia for more than a decade.

An Associate Professor at Western Sydney University, and grandmother-to-five, Jane, 67, Sydney, was diagnosed  with the relatively uncommon form of pneumonia, non-specific interstitial pneumonia (NSIP), in 2006.

In the ensuing decade, Jane has experienced multiple episodes of pneumonia which have frequently rendered her hospitalised for days.

Pneumonia has taken a significant physical, emotional and financial toll on Jane. Her physical ability is nowadays limited due to the difficulty she experiences with simply “breathing”. The corticosteroidal treatment for her lung disease that she adhered to for 12 years, has further compromised her mobility, rendering her with steroid induced osteoporosis and the joint disorder, osteoarthritis.

Jane is nonetheless, a strong advocate for vaccination against pneumococcal pneumonia for those aged 65 and over, and people living with chronic diseases.

This is Jane’s story.

In 2006, after battling cold-like symptoms and extreme fatigue for a couple of years, Jane was diagnosed with NSIP confirmed by a lung biopsy.

“My specialist commenced treatment with steroids and antibiotics. It’s a tricky type of pneumonia that’s caused by the inability of the lungs to process oxygen. It’s usually a bacterial infection that sets it off, and it flares up pretty quickly,” said Jane.

Jane has since experienced multiple episodes of pneumonia. So much so, that she now follows a particular routine when experiencing a flare.

“I’ll usually wake up at three or four o’clock in the morning struggling to breathe. By that stage, I will know whether I’m able to get myself to hospital, or whether I will need to call an ambulance.

“What follows is usually admission to hospital, stabilisation of my condition, treatment with antibiotics and more steroids, and then eventual discharge. The whole process takes around one week, and it’s exhausting. When I come home from hospital, I barely have the energy to have a shower, and it takes weeks to recover,” said Jane.

“There have been various occasions during these episodes, when I thought I might die.”

The physical impact of multiple episodes of pneumonia and subsequent treatment has manifested in various ways.

“I find it very hard to breathe, particularly when it’s hot and humid. I struggle to walk even five metres. I’ve also got osteoarthritis, and can only walk with the aid of a crutch,” Jane said.

To seek respite from her humidity-induced breathing difficulties, Jane frequently travels to Sweden during the Australian summer.

“I fare far better in colder climates. At the beginning of 2017, while in Stockholm, I had an episode of pneumonia caused by Influenza A. It was a little worrying to be so sick in a foreign country, but Sweden has fantastic medical care, and I was only hospitalised for four days,” said Jane.

Apart from the physical effects, pneumonia has also proven financially burdensome for Jane.

“Pneumonia is expensive. It’s not only the treatment, but because physically, I struggle with even menial tasks, like grocery shopping and cleaning. I shop online and have my groceries delivered and also pay a cleaner to come once every two weeks.

“I have also recently had my bathroom tailored to suit my needs by Robbie, a compassionate and creative plumber. These people support me and make a huge difference to my life,” Jane said.

A passionate academic, Jane is dedicated to her research and teaching at Western Sydney University. Given her ongoing battle with pneumonia, Jane is grateful for the on-going support she has had from her employer.

“I’m very lucky to have a job where I can use my mind. If I wasn’t doing academic work, I’d most likely be retired. I have had a work adjustment plan in place for the past four years that allows flexibility, to work from home when I’m tired or ill. I really enjoy my life and want to go on living,” said Jane.

Despite the adversity she has faced, Jane remains staunchly upbeat, and has a strong message for Australians at-risk of pneumococcal infection.

“All Australians aged over 65, and those living with chronic medical conditions, should protect themselves against the potentially life-threatening, but preventable infection, pneumococcal pneumonia. Everyone should get immunised.”