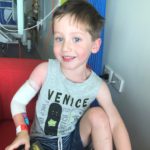 As told by his mother, Natalie

As Natalie reflects on the terrifying and exhausting journey to diagnosis for her son, she recalls being able to hear her baby boy struggling to breathe from across the hospital ward. Josh was about 8 months old when he started getting sick. It coincided with him beginning day care, so initially Natalie didn’t think much of it. When dozens of courses of antibiotics provided no relief, the mother-of-one knew something wasn’t right.

“He was admitted to the ICU and we spent a month in and out of hospital. At times he could hardly breathe, he was always coughing and vomiting and often had temperatures over 40. At one point his entire body was swelling up and he was so sick he could hardly move or breathe.

“Finally, the doctors told me they suspected he had an immune deficiency and it was likely he had suffered lung and liver damage after all his body had been through. Over the next two weeks I spent most of my time trying to get my head around what all of this meant.”

Four months after he was first hospitalised, Natalie’s precious boy was diagnosed with a rare lung disease, Bronchiolitis Obliterans.

“It was devastating. Needless to say, I spent a lot of time reading up on his new diagnosis, however I found it very difficult to obtain much information about the condition, especially in children.

“Our healthcare team and the hospital staff have been amazing over the years, but they’re all still learning so there is lots of trial and error, especially when it comes to the correct dosage and administration method of antibiotics during flare-ups. Josh doesn’t qualify for additional support at school and as he’s often fatigued during the day he struggles in class and has fallen behind. We’re looking into accessing occupational therapy privately as the public waitlist is extensive and access psychological support through the private system to help him.

“Josh’s medication requirements and weekly infusions are a real challenge. He’s still so young and hates to take his medication. Over the years he has developed a needle phobia and fear of medical procedures in general. We also have to really monitor his food consumption to make sure he’s getting the nutrition he needs to support his body.”

As the family settled into their new norm, the ever-gnawing question, “what will Josh’s future look like?”, played on Natalie’s mind so she turned to Facebook to try and connect with others in similar situations.

“Through social media I connected with some incredible women who have been advocating for their children with rare lung disease and other Australian families impacted. It was there that I connected with Lung Foundation Australia and became involved with the Young Lungs program, which is helping families like ours find resources, help and support.”

Josh has a long journey ahead, but Natalie, who describes the now six-year-old as an incredibly resilient and happy boy, knows she’s not alone.

“Josh’s diseases are invisible but they are constantly there; if you walked past him on the street you would have no idea about his silent struggle with rare disease. The constant medication, side effects, needles, breathlessness, wheezing, cough, fatigue, appointments, hospitalisations, and tests; but he doesn’t let any of that hold him back.”

“There is a lot of fear there but being able to talk to other families who understand what you’re going through is so good. I see other lung families in their struggle trying to navigate systems, systems that I am only just learning how to navigate.

“I joined the Young Lungs group hoping to be able to help other families find that information and support that is so vital, especially in the first stages of diagnosis. Lung Foundation Australia has made massive headway in this area and I am so happy to have been a part of it.”

“It is so important for people to understand that they are not alone and don’t have to go through this journey by themselves. Reach out, connect, ask for support and know that it’s okay to struggle, it’s okay to cry and have meltdowns, it’s okay to want a ‘normal life’ for your child. It’s okay to get sick of the hospital visits and the medication battles and the utter terrifying thoughts that enter your mind on an almost daily basis. But also know that you are so strong, stronger than you ever knew you could be you are not alone and your child is a superhero, ask the questions, keep battling and connect.”