In 2013 at the age of 61, I was diagnosed with lung cancer out of the blue after having a CT scan on my neck and upper back for ongoing nerve pain. The CT scan showed the cause of my nerve pain, but it also unexpectedly showed a 3cm mass at the top of my right lung.  I had not experienced any symptoms at all.

I’m a never-smoker. It was a complete surprise. That seems to be a very common story.

A core needle biopsy showed it was adenocarcinoma. Surgery followed quickly – a right upper lobectomy, removing the top lobe of my lung. The hope was it was at an early stage (IIa I think) and removing that part of my lung may result in a cure. It wasn’t to be. Pathology from surgery showed it had spread to the lung lining (pleura). That meant chemotherapy for 12 weeks.  The aim was still for a cure, and with chemo I was told the stats on surviving five years was 65-70 per cent (not bad but not great).

Some people don’t have many problems with side effects of chemo. Some do. I had a really bad time the whole week after that first treatment. I could barely eat or drink. They said to phone the chemo ward (during business hours) if I had nausea. I didn’t have nausea. I just couldn’t eat or drink much as my stomach felt very hard and full. Apparently that was meant to be known as nausea. I lost 4kg in that first week and my chemo dosage was reduced, plus I had to come back to the chemo ward three days after each treatment to get a drip with saline fluid to rehydrate me. It was a bit easier after that.

Speak up if you have problems during treatment. Your symptoms might not perfectly match those they tell you to look out for, and they will be able to help you. If I had known how bad I would feel, and that it was not normal, I would have spoken up earlier and I’m sure it would have been an easier journey. 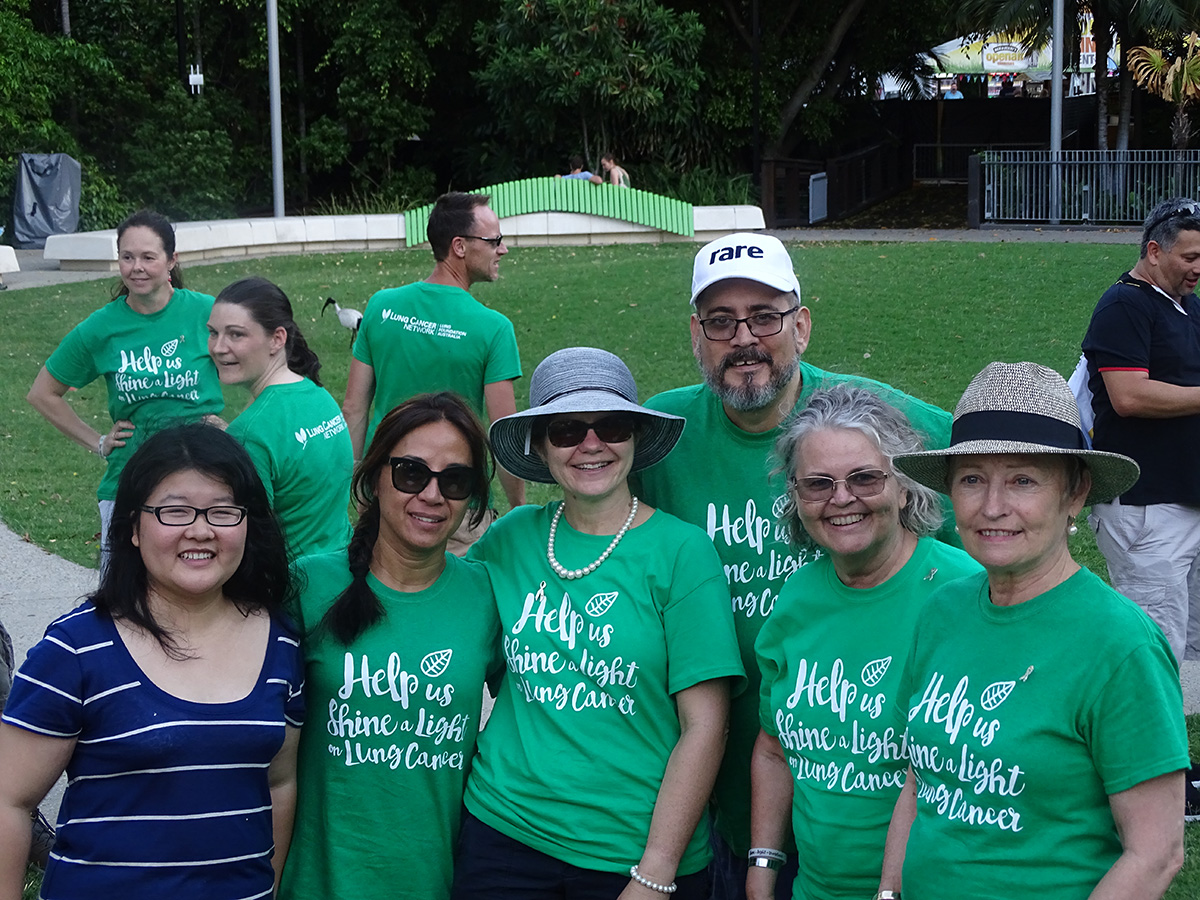 One month after chemo ended, I became increasingly short of breath – my right lung space was filled with fluid. What followed were two thoracentesis (drainage) procedures over the next two months, but it filled up again. It was decided I needed a pleurodesis surgery. That surgery is a pretty serious thing and knocks you around a bit (but no more than the original lobectomy surgery), but it worked – I could breathe properly again.

I quickly felt the stigma of lung cancer.

Every single person I told I had lung cancer immediately asked me, “were you a smoker?”  Not one person just said “oh no, I’m so sorry to hear that”. It was always “did you smoke?” I know how bad that made me feel, it must be so much worse for someone who has a smoking history.

This lack of compassion adds greatly to the sense of isolation we feel.

It’s just cruel to not respond with kindness to someone who tells you they have cancer – very cruel.  I eventually learned to always say, “I have lung cancer, but I never smoked”. Even then, I’ve found most people still do not respond with kindness; mostly they give me a look of doubt. They don’t seem to believe me that never-smokers also get lung cancer, and in large numbers too. I now use it as an opportunity to educate people.

In late 2014, 12 months after chemo ended, my routine review by PET/CT scan showed an enlarged lymph node in the centre of my chest. That dreaded word: recurrence. This news was given over the phone by my medical oncologist who said they were referring me to a radiation oncologist at a different hospital for radiation treatment. My oncologist didn’t offer for me to come in and talk it through, so I had to ring the office and make an appointment for the following week. That was a tough wait.  I was given the bare facts, but no support or encouragement. I was gutted. I found the first week of radiation treatment overwhelming – many tears flowed. But after that it became a routine and went smoothly, with very itchy patches of skin and fatigue being the only side effects.

If you can, always take someone with you for support. You shouldn’t have to do this alone.

Up until then I was being treated in the private system.. During all of this, there was no-one I could call if I had queries, apart from the medical oncologist’s secretary who was very nice and would pass messages on and I would await an answer. Answers were usually short – yes/no/make an appointment. Very little information really. I must say that most of the information I had, I obtained myself from the web.

I began to think: isn’t there something better than this? What about the well organised “clinic” setups they have for breast cancer? They combine all areas of medical support, and wrap that around the patient. They are well funded, and very good at it. Surely for something like lung cancer, which is by far the biggest cancer killer, there would be something better than just being passed from one private doctor to another. I rang the Cancer Council and then Lung Foundation Australia. Answer: Yes, there were several “clinics” in Brisbane for lung cancer however at that time they were in public hospitals. They are called Multidisciplinary Teams (MDT). I was told each MDT can include a variety of professions such as medical oncologists, surgeons, radiation oncologists, cancer care nurses, clinical trial nurses, dietician, physiotherapist, psychologist, social worker etc – a coordinated team approach. All of those services are available to you. If you have a question between appointments you can call the cancer care coordinator and she will seek out the information for you, or arrange an appointment. I thought hallelujah, this is what I need.

So I got up the courage to ask my oncologist to refer me to a specialist in lung cancer treatment, for a second opinion. I was referred to a specialist at The Prince Charles Hospital (TPCH). I was impressed with his knowledge and manner. I now see him in the public hospital system as a private patient. Having switched from private to public, I now have the MDT available to me if needed and it’s all arranged by the cancer care coordinator – a real blessing.

At around this time I was forced to resign from my job due to the ongoing health issues – so no more income. Luckily for me, being treated in the public hospital system also means no more huge out-of-pocket costs that were associated with some of my private medical care.

Don’t be afraid to ask for a second medical opinion. In fact, I think it is an essential. If nothing else it may give you extra confidence with the doctor you are already dealing with. Most important though is to quickly get yourself under the care of a MDT specialising in lung cancer.

Then in June 2015, my CT scan showed another recurrence and spread. It had come back with a vengeance.  And my lung was again filled with fluid so another pleurodesis surgery followed, and then on to medical oncology treatment.

My treatment now is via a type of chemo called targeted therapies. These drugs target specific genetic mutations that can underlie a particular cancer. Not everyone has them. In my case, I have an EGFR mutation. My new medical oncologist recommended a clinical trial to me. I started the trial over two years ago. I responded very well, and I had very quick improvement. More than two years on I am still here and feeling well thanks to the trial drug, with relatively minor side effects, and my CT scans now show the tumours are too small to measure. Those words are as good as it gets, yay! It doesn’t mean I’m cured. I’m always mindful that these targeted therapies inevitably stop working due to resistance, and then the cancer comes back. I’m hoping that won’t happen for quite a while, and by then there may be a new drug treatment available to keep things under control a bit longer.

I have now become a lung cancer advocate working towards better treatment for lung cancer patients; more support; more compassion; and more funding for clinical trials. It’s my way of finding some meaning and purpose in having this awful disease.

I have created a closed Facebook group called “EGFR Lung Cancer” for Australian patients living with non small lung cancer with EGFR mutation. To join the group, please go to https://www.facebook.com/groups/EGFRLungCancer/ then click on the “Join Group” button.