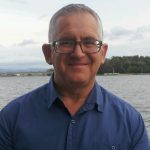 “No matter how well-meaning and understanding people are, it is not the same as talking to someone with the same lived experience.”

Richard, 60, was diagnosed with Idiopathic Pulmonary Fibrosis in 2017, having originally put his symptoms of breathlessness down to a lack of fitness.

He says the diagnosis, to put it mildly, came as a “bit of a shock”. At the time, there were two drugs available which could help to slow the progress of the disease but they would not stop nor reverse it.

After nearly two years of rapid health decline, Richard has now been listed for a lung transplant.

“I’m waiting and hoping for that phone call,” he says.

“As the disease progresses, you become less and less capable of doing everyday things. Your body just concentrates on functioning.

“By the time I get up, have a cup of tea, my medication and a shower, that means 30 minutes’ recovery time. Every time I do something, that’s about 30 minutes recovery time. Things happen very, very slowly.”

As a joint leader of an IPF peer support group facilitated by Lung Foundation Australia, Richard is deeply aware of what it means to have others to talk to who really understand.

“The virtual forum gives you the opportunity to speak to people from a long way away.

“People in different regions have different things that may impact them such as humidity, heat, pollen; a lot of ideas get floated around and you can choose what may be of benefit.

“People are also at different stages of their lung disease, so can share tips on how to best manage it.”

His fellow support group leader Paul, 77, was diagnosed 14 months ago, having originally approached his GP to find out why he was finding himself out of breath simply talking to people.

“The hardest thing is to explain to my grown-up family that I’ve got IPF, a terminal and progressive lung condition.”

Paul is also managing a bone degeneration issue but like Richard, has found it “very encouraging” to be part of a support group. He said the fact that one fellow member had now been living with IPF for 14 years gave him hope of more time ahead with his five children and seven grandchildren.

There is also hope through the ongoing research developments and new treatments.

“Being in a support group has helped me to understand that I’m not alone in dealing with these issues. There are other people with the same problem, some worse than me,” Paul said.

“Talking to and learning from other group members, and them learning from me, about our experiences and what we’re going through has been very, very helpful.”

The importance of funding for such support groups is summed up by Richard: “not only do funds go towards research and development of support programs, they cover the  whole gamut of lung disease. It is just a huge area that needs a lot more assistance and every cent helps.”

No one should ever feel alone. Your donation helps us to fund support services that help people negotiate the challenges of living with a lung disease. Support us to support our community.