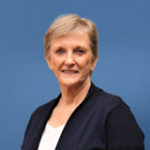 “If there is to be any progress in the treatment of any disease then research is absolutely crucial. I am so grateful for those who have been involved in research over many years and pray that as research continues, the hope of a better, brighter and longer future for all us who live with Pulmonary Fibrosis (PF) will become a reality.” – Linda

In recent years, research has discovered treatments that help to slow the progression of PF – a debilitating and devastating lung disease. With access to life-changing treatment through a clinical trial, Linda is enjoying precious time with her grandchildren and the future is looking brighter.

My husband and I lived in a small rural town in the wheat belt of Western Australia, about two and a half hours southeast of Perth.

Every year when the farmers started burning their stubble ready for a new seasons planting, I would start with a tickly cough that was exacerbated by the smoke from wood fires that the majority of houses used throughout our cold winters. My General Practitioner (GP) would give me inhalers but my cough would last until the warmer weather arrived.

At the end of winter in 2014, whilst working in admin at our local nursing home, a visiting state manager insisted I see a doctor as my cough was particularly bad. I was diagnosed with bronchiolitis and had no x-ray or medication prescribed, being told it was viral.  As usual, my cough settled as the weather warmed up.

January 2015 saw some very large bushfires in the region and our town was covered with smoke for a number of days, prevailing winds blowing it out then bringing it back. So, I coughed.

I resigned from work in that April, and, still coughing, saw my GP for inhalers again. We were planning a cruise and I didn’t want it spoiled by my continuous coughing. I also noticed that I was getting more puffed doing day-to-day activities and was pleased that I was finishing work so that I could focus on me for a change and start losing weight and getting fitter.

We cruised Asia – beautiful, warm, humid weather and my cough eased. Later that year we visited Queensland for my brother’s 60th at the end of June. By the time we returned, I was coughing again.

At the end of July I suffered with a raging temperature that had me shivering and shaking in bed with violent coughing.  I was diagnosed with pneumonia in both lungs and prescribed two courses of antibiotics, which didn’t change anything except the temperatures. So, it was another visit to the doc, different antibiotics and a question from me as to whether I should have an x-ray. This confirmed the pneumonia in both lungs, but nothing else.

Still, I was coughing quite fiercely. My husband insisted I see a different doctor and with instructions to “not to come back unless he was putting me in hospital”. Apart from the cough I was feeling fine, though worn out from coughing.

A High Resolution Computed Tomography (HRCT) scan reported emphysema and fibrosis. Not knowing anything about fibrosis I think I just focussed on the emphysema. I had never smoked, though grew up with parents who had been smokers. I was stunned that I could have such a disease. My “Dr Googling” on fibrosis also added to my disbelief. Surely they’ve got this wrong!

The specialist ran pulmonary function tests, checked for clubbing of my fingers and listened for crackles in my lungs. He totally ruled out emphysema and, after autoimmune blood tests showed negative, he suggested an open lung biopsy. At the time I told him “well, it looks like I’m a goner”, and he responded, “this is not cancer, I’ve seen patients die with this, not of this.”

It was only in the car on the way home it came to me that a lot of cancers are curable. Everything I had read on this disease told me it wasn’t.

In January 2016 a video assisted open lung biopsy confirmed Idiopathic Pulmonary Fibrosis (IPF) and I was referred to the advance lung team. I commenced a 12 month drug trial in April 2016 and found out in January 2018 that I had been on 50/50 drug and placebo, however the company decide to not go ahead with a further trial.

Since diagnosis I have only had mild progression and my condition has been stable for most of that time. I’m so grateful for this as it means I can enjoy the delights of my 5 grandchildren. I have been taking Esbriet for the last 2 and a half years and whilst I have occasional side effects they have not been overpowering. I strongly believe this medication has contributed to the stability of my condition. We have recently retired to a beautiful coastal city which means we are closer to our family and we like to get out and about as much as possible.

I desperately want to see my grandchildren grow up. Though I can no longer play chasey, there is so much that I love doing with them.

With a rare disease like PF there is little impact on governments to provide funds for research. The heartfelt appreciation I feel for donors, be they corporate or private, is because they are showing that WE matter. That our lives deserve the same attention as the more well known conditions that are well publicised.