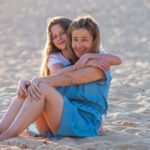 For Georgia, research into lung cancer means more treatment options to allow her, and other Australians in a similar situation, to spend more time with their children and family… not just this Christmas, but in the years ahead.

Yet research conducted overseas has brightened the outlook for the former flight attendant, who was stunned to be diagnosed with metastatic Stage 4 non-small cell lung cancer.

She was fatigued, had low iron levels and had been battling what seemed a terrible cold for about four weeks but never suspected the news that was to come.

“I’d been going to my GP for two years saying I was tired, and we just put it down to work and looking after children,” Georgia says.

“I mentioned to my GP that I’d blown my nose and there was a tiny bit of blood. I didn’t think anything of it … I had basically been at a spin class, and I was running around and doing lots of long- haul flights.

Georgia found herself booked in for a CT scan … and received the shattering diagnosis.

Life-changing research from genomic testing carried out overseas was a game changer.

“My treatment so far has involved chemotherapy, a lobectomy, immunotherapy, 30 radiation sessions and I’m now on a daily targeted therapy tablet,” she says.

“I hope research will give everyone in Australia access to the same level of amazing care I had with my specialised nurses and oncologists, which enabled me to access cutting-edge testing from the United States of America.

“My hope for the future from gathering research is that lung cancer survivorship for five years is at 90 per cent, in line with all the other cancers.”

Research has dramatically changed the prognosis for Georgia. It can improve the lives of other Australians with lung conditions too.

“My hope for the future is that lung cancer will be managed and treated as a chronic illness. ” she says.

“Research would mean that lung cancer would have more than four drugs to treat people living with lung cancer and give us a little bit more time to spend with our loved ones.

“Nearly 10,000 people die of lung cancer a year. Let’s start saving some of these lives.”

Give hope by giving to research.