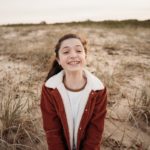 As told by her mother, Susanna

Born at 34 weeks gestation, Sarah was critically ill with respiratory failure and spent three long months in intensive care before finally being discharged home. Medical professionals had little idea what was wrong with the tiny baby. Her terrified parents, Susanna and Darren, who had two little ones at home, had no idea what the future would hold.

“The first three years of Sarah’s life were a whirlwind of hospital admissions and medical reviews. We have lost count of the times she has been admitted to hospital for respiratory issues. At five months, following extensive testing, which included an invasive lung biopsy at three weeks old, Sarah was diagnosed with pulmonary interstitial glycogenosis, a type of Childhood Interstitial Lung Disease (chILD).”

For eight years Sarah relied on continuous oxygen and mother Susanna says the true impact of the rareness of Sarah’s condition is far-reaching and often unseen by the outside world.

“There is such a big gap in supportive services and financial help for both the child and the rest of the family. In Australia, we’re quite fortunate that we have a good public healthcare system but the financial impact is never-ending. Sarah is fed both orally and via a gastrostomy, wears hearing aids for auditory neuropathy and struggles with joint hyper mobility syndrome so a lot of support systems are in place to help her live her best life. As she moves into high school next year, we’ll have to navigate all of that in a new environment too.”

For parents like Susanna and Darren, each day is filled with uncertainty and unique challenges.

“There are long lasting effects we don’t know yet. Sarah is vulnerable to viruses and bugs, and the isolation that comes with that affects the whole family. Our oldest child remembers Sarah being in ICU as a baby and both her siblings worry about bringing home germs. That anxiety has been a big struggle all her life.

“When Sarah was little and she was on oxygen people would move away and not want their children to associate with her, but she didn’t really understand. She knew that catching a cold could make her really unwell, but she didn’t know what to do about it or how to protect herself. As she’s gets older you start to see those things having a psychological impact. We’ve managed to live in a little bubble with close family and friends which allows us to monitor and safeguard Sarah’s health as best we can, but as she gets older her ‘bubble’ is growing.

Some days, the emotional toll can feel insurmountable, but Susanna lives by the old saying that it takes a village to raise a child.

“As a parent, you take on the role of advocate and you learn to deal with it the best you can and find your tribe – Sarah has made me brave and assertive. When she was a baby there wasn’t an online presence or any way to connect with other families so being able to do that now is so, so important. Sharing experiences with others who understand the unique challenges of having a child with a rare lung condition makes all the difference.

“I’ve thought about writing a book about all the things we wish we knew that we could pass on to other families. For people who haven’t been touched by a rare lung condition and don’t understand the impact, I would encourage you to ask questions – I would much rather people be curious than make assumptions.

“We focus on Sarah’s abilities, not diagnosis, and encourage her to try anything she puts her mind to – she is resilient, tenacious and has a great sense of humour. At times we worry what the future may hold for Sarah but for now we delight in listening to her singing in the shower and watching her scale a wall with ease at rock climbing. Sarah is simply a blessing.”